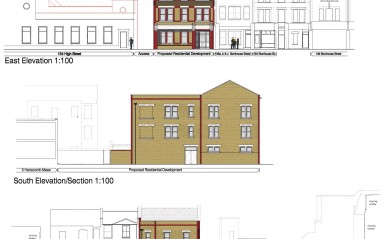 Located on land directly to the rear of Clapham High Street, the development seeks to provide new apartments within a sought-after district within London providing desirable living accommodation.

The developed proposals currently seek to obtain planning consent for 5 residential apartments, one single apartment at ground floor level with two apartments at first and second floor. Private amenity space has been designed and provided via a rear communal garden.

Due to the nature of the site a number of discussions and applications have been sought to deliver a suitable project for the urban grid. During 2017 an initial application was refused which led to a later application in 2018 withdrawn due to Urban design comments.

Following further pre-application submissions and meetings with the Planning department and Urban Design Team a new application was submitted for 5 residential units.

The scheme evolved and reduced also in its physical presence on the street scene from 4 levels to 3 which reflecting similar to that of 156 Stonehouse Street.

Closely working with Moxley Architects on a neighbouring scheme, this helped ensure that both schemes could be buildable and that accommodation provided along the joint boundary line respected each adjoining area of accommodation.